Having received mixed reviews, Broome was a pleasant surprise - not bad for a major town of the Kimberleys. We were made to feel welcome by the locals, the vast majority spend their summer months further south or come over from the east coast. We were only surprised by the number of well manicured resorts around Cable Beach; Other than this fella holding onto his patch... 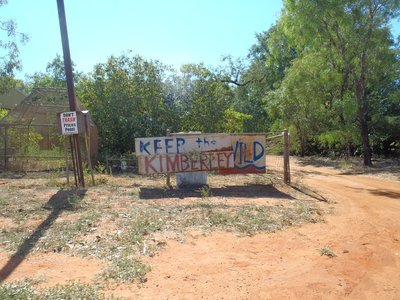 ... We can see why Cable Beach is often voted as one of Australia's best. 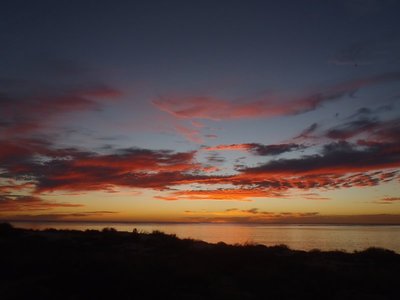 Towards Cape Leveque we stayed at Quondong Point, a free camp as raw as it comes - Rocky beach, red earth tracks and well spread out sites, it felt like we had the place to ourselves.

Bob Marley is perfect for corrugated dirt tracks. It was definitely needed for our 110km day trip to Middle Lagoon via Beagle Bay. 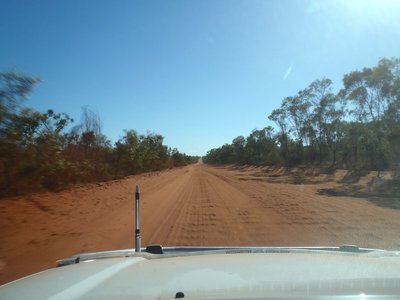 The Beagle Bay town dog could only be one breed and was... mmn, well loved. 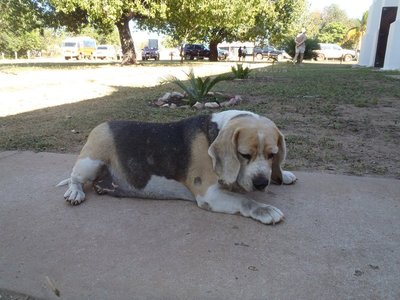 The Church was in service so unable to go inside but interesting to drive through a remote community. 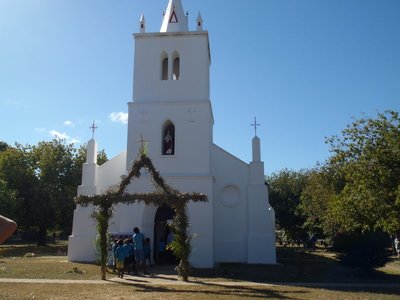 Middle Lagoon was still worth the drive (we told our weary selves as we arrived back at base camp). 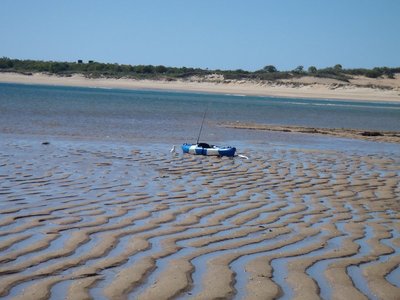 Lure fishing back at Quondong was incredible but there were a few casualties. The trusty telescopic rod, on loan from the Bourke clan, caught this GT beauty before meeting its match. The second fish must have been huge, it snapped the rod and took the new lure! RIP T-rod, you lived a very full life, you will be missed. 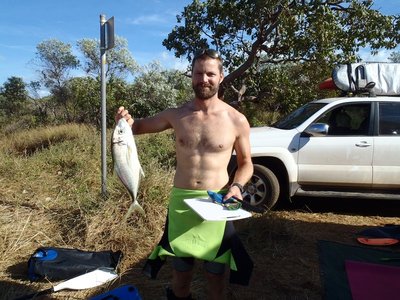 Returning to bitumen has never felt so good! The overnight roadside stop before Fitzroy Crossing was named the Boab Tree rest area, understated we thought! 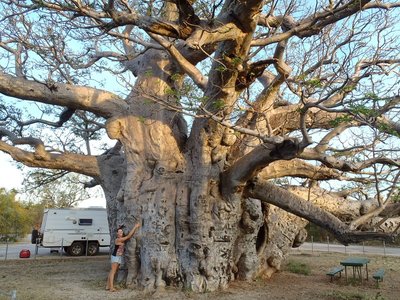 The height of the Fitzroy Crossing gives you an idea about how much water flows through the wet season. 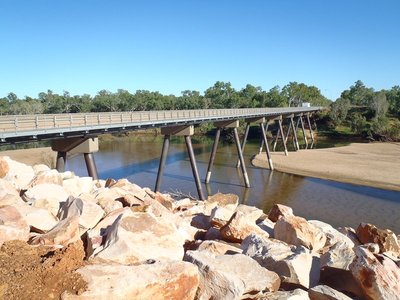 Brad took the chance to kayak up Geikie Gorge one afternoon and spend the night camping along the river...

... The rangers recommendation was to head to Crocodile Creek (only freshwater crocs here!) about 6 kms further north... 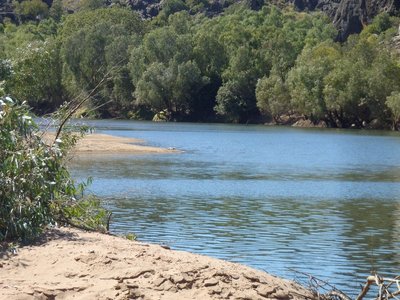 ... As soon as the trees began crowding over, it felt like a comfortable place to set up camp for the evening. 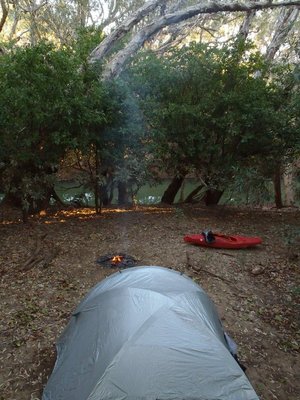 ... The feeling of isolation was sometimes unnerving with plenty of unfamiliar and abrupt sounds. Still, there was a sense of calmness about this place. 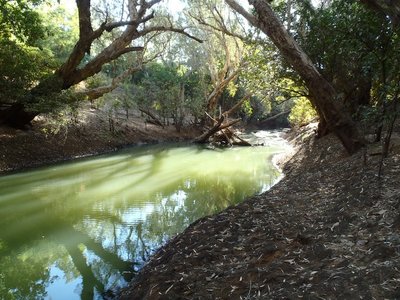 Fitzroy Crossing was a chance to stock up and recharge... 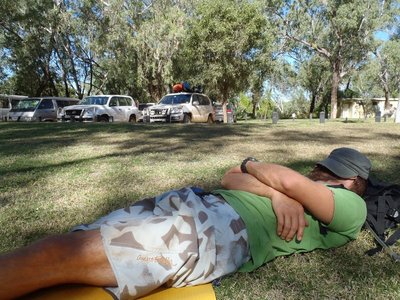 ... before heading towards the infamous Gibb River Road, 660kms of corrugated red dirt track... I can hear "Buffalo Soldier" already

Leaving Exmouth we stopped in at Tom Price, the gateway to Karijini National Park. This was our first experience of a mine town, covered in dust and overrun by Toyota utes and 4WDs, still lovely warm people... I'd hate to be the guy doing an inspection on this wheely big truck!.. 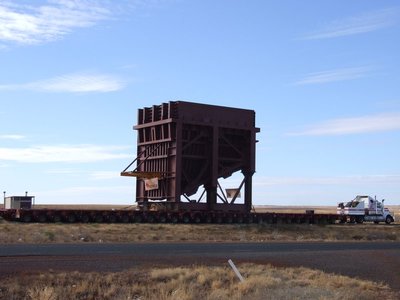 The park covers over 600,000 hectares, its draw-cards, the spectacular gorges, waterfalls and rock pools, so we setup camp right in the thick of all the action at Dales Gorge. Waisting no time we headed to Fortescue Falls. 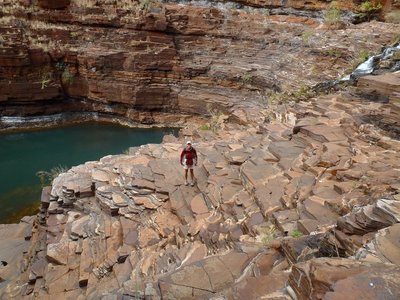 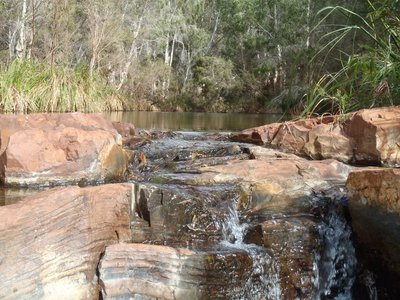 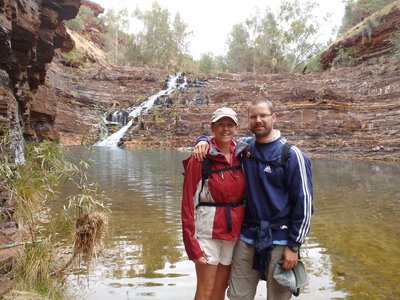 After negotiating the rocky steps and narrow trail we arrived at the waterfall in awe. We continued to ramble along the gorge floor to Fern Pool, the first beautiful swimming hole. 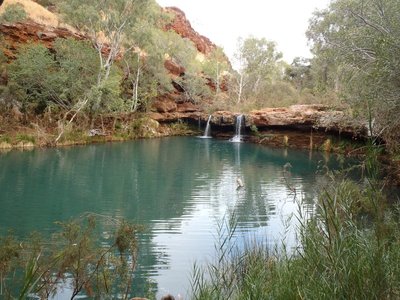 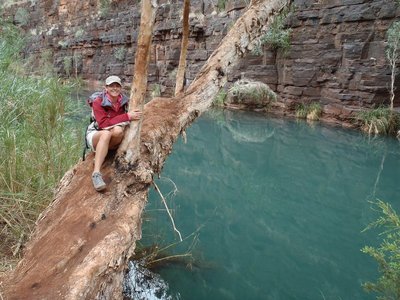 Following the stream to the picturesque Circular Pool we were guttered that we forgot our towels... Until we saw the swimmers shock reactions to the "refreshing" (bloody cold) water. 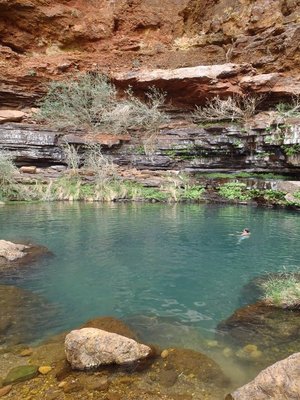 The return trip offered a short cut via the cliff top above Circular Pool. We gladly took this option... 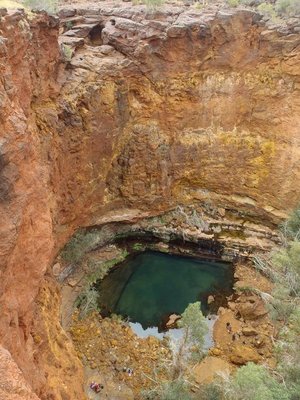 The next day we decided to hike through Weano Gorge, promising to be bigger and increasingly difficult. 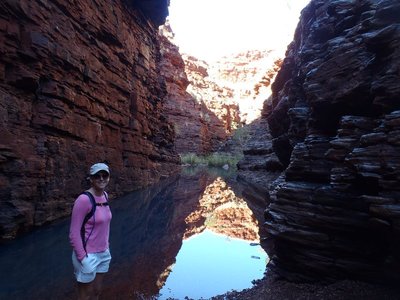 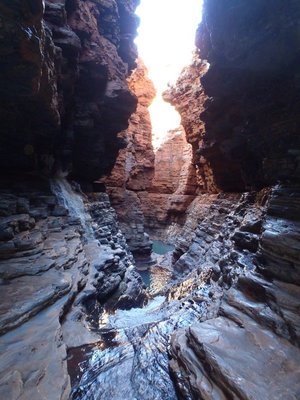 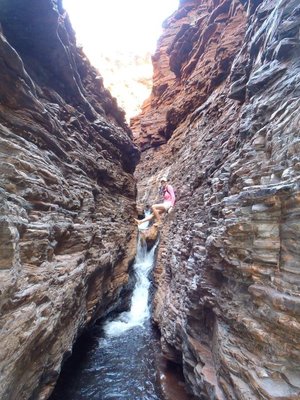 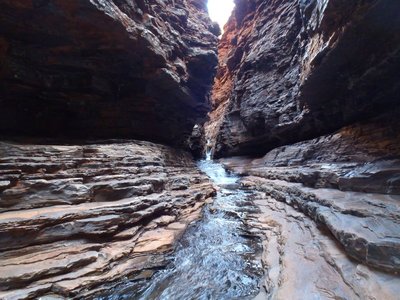 Minus the abseiling equipment we came prepared with our towels this time to take a dip in Kermit Pool, at least one of us braving the cold. 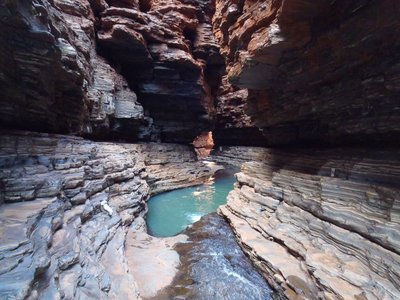 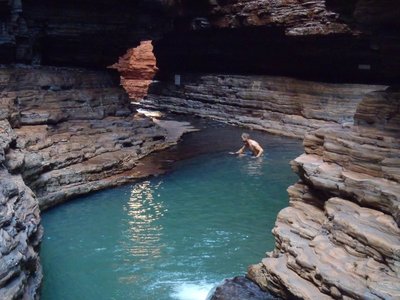 Our day was capped off at Oxers lookout. Extraordinary views of four gorges converging 100 metres below. 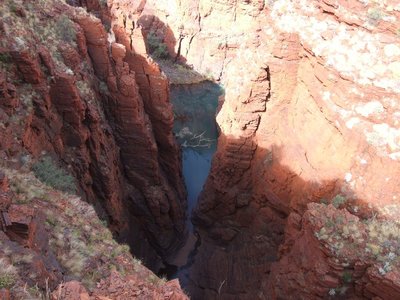 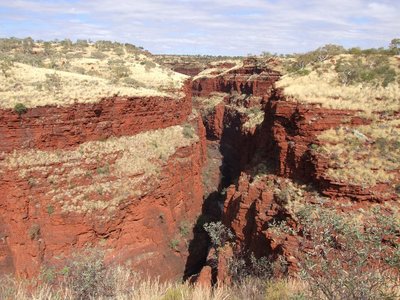